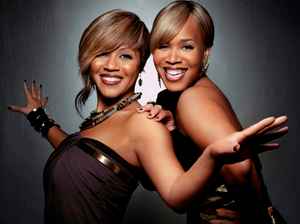 Profile:
U.S. R&B/Gospel duo made of sisters Erica Atkins-Campbell and Trecina "Tina" Atkins-Campbell. They grew up in Inglewood, California. Their mother Thomasina Atkins, was an evangelist and choir director at the Evangelistic Church of God in Christ, and father Eddie A. Atkins, an Elder in the Church of God In Christ and Gang/Youth Counselor. Their mother and father were married and divorced three times when their father, Eddie, died in 2013.

Starting in the local church choir, they appeared with their siblings on the Bobby Jones Gospel show on BET. They were soon discovered by producer Warryn Campbell and subsequently lead to a deal with EMI, allowing their songs to appear on the soundtracks to the movies Dr. Dolittle, and The Prince Of Egypt. In 2000 they signed with Columbia Records/C2 Records and released their first single, "Shackles (Praise You)" from the album 'Thankful', which reached number 5 in the U.K. singles chart. Their second single "I Sings" featured rapper BB Jay. In 2002 they released their second album Incredible, which contained "In The Morning" and "I Try". After taking time off to be with their families, they returned in 2005 with their third album 'Mary Mary', which gave them a hit with "Heaven" and the follow up single "The Real Party (Trevon's Birthday)". In 2006 they released a Christmas album entitled 'A Mary Mary Christmas'. In 2008 they returned again with the album 'The Sound', from which the single "Get Up" was released through iTunes. Further albums followed in 2011 with 'Something Big', and 'Go Get It' in 2012.
Sites:
ilovemarymary.com, Facebook, instagram.com, Twitter, Wikipedia, Wikipedia
Members:
Erica Campbell, Tina Campbell
Variations:
Viewing All | Mary Mary
MM, Mary-Mary, MaryMary, Marymary