Did you mean the artist named 53? 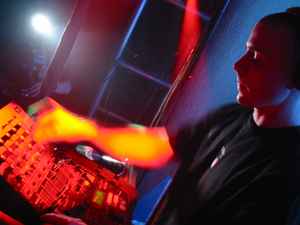 Real Name:
Casey Hogan
Profile:
Casey Hogan was born in Miami, Florida. After his father, who by the way is in the Radio business uprooted Casey multiple times, they finally settled in Tennessee after short stays in Oklahoma, Texas, Kansas, Colorado, and Kentucky. Growing up around the radio business was definitely a benefit for Casey. He was exposed to all kinds of music from Jazz and disco to electro, 80's electronic and everything else under the sun. Although Casey appreciated many of the different styles he was exposed to, the newbeat/industrial sound of the late 80's is definitely what caught his attention. Stuff from Pink Floyd, Depeche Mode, Level 42, and New Order, is what initially got him started. Not to long after that, Casey was also particularly interested in the scratching and hip-hop thing as well as the moody techno sounds coming out of Detroit.

As early as 1991, Casey was making mix-tapes of his favorite tunes for his friends. At the same time Casey also began dabbling in production. He would go down to his father's radio station and work on the multitrack dubbing carts, splicing tape, and editing commercials after school. Not to long after in 1992 Casey began performing at both raves and clubs throughout the South and Southeast as a DJ. After building some experience in the studio, in 1994 Casey began to create his own music. He initially started with drum machines. Then he began to build his studio up. At that point Casey decided it was time for even more changes. Although the scene down south was growing, it seemed it would never catch up with the big cities of the north like Detroit, Chicago, or New York. So in the spring of 1996, Casey packed up and moved to NYC. Once he arrived in NYC, Casey began doing sound design/engineering for quite a few multimedia companies doing everything from original scores, to remixes, to edits, to everything else that takes place in a production house. Not too long after this, Casey got a job at the world-renowned vinyl shop Sonic Groove.
Sites:
SoundCloud
Aliases:
Alric
In Groups:
C.G.I., Dietrich Schoenemann & Casey Hogan, Further Thoughts, Giovani & Mosler, Nu Alliance
Variations:
Viewing All | Casey Hogan
C. Hogan, Casy Hogan

December 31, 2015
Casey is back releasing on Immigrant next year - first in 8 years!

August 26, 2015
Much of his releases in just several years time, as seen above, are among the best records you'll ever find (or listen to) in the genre. His style is still fresh among todays' music, and mostly still surpasses it in terms of quality.