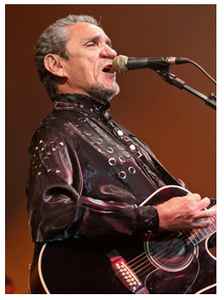 As with many musicians back in his younger days, he was first influenced by rock and roll; however, at the age of 20, his music took a more Northeastern Brazilian approach. Zé Ramalho's lyrics however, are very influenced by the socio-economic difficulties faced by the average Brazilian.

Zé Ramalho was born to Estelita Torres Ramalho, a elementary school teacher, and Antônio de Pádua Pordeus Ramalho, a Seresta performer. When he was two years old, his father drowned in a reservoir of the sertão, and he was then adopted by his grandfather. His love for his grandfather would later be expressed in the song "Avôhai". After spending most of his childhood in Campina Grande, his family moved to João Pessoa. He was expected to become a doctor.

Also in 1974, he performed for Tânia Quaresma's movie "Nordeste: Cordel, Repente e Canção" soundtrack. At that time, he figured out a way to mix all the influences he received throughout his life: From Rock 'n' Roll to Forró. An year later, he recorded his first album, "Paêbirú" along with Lula Côrtes through the label Rozenblit. Today the copies from this very rare vinyl are highly-priced in the international collector's market.
Beginning of the major musical career:1975-1984

In 1977, he recorded his second album, the self-titled "Zé Ramalho". An year later, his second son, Wilson, was born. In 1979, the third son, João (born to him and to his wife Amelinha), came along the third album, "A Peleja do Diabo com o Dono do Céu" (also referred to as "Zé Ramalho II"). He then moved to Fortaleza in 1980, where he wrote and published his book "Carne de Pescoço" ("Neck's Flesh"). The fourth album, "A Terceira Lâmina", was released afterwards, and the fifth one, "A Força Verde", in 1982.

In 1983, he broke up with Amelinha and moved to Rio de Janeiro. After releasing his sixth album, "Orquídea Negra", he got married with Roberta, Amelinha's cousin, in 1984.
Small declining: 1985-1990

The mid eighties would witness a small decrease in Zé Ramalho's popularity, with the releases of the albums "Pra Não Dizer Que Não Falei de Rock (or "Por Aquelas Que Foram Bem Amadas") (1984), "De Gosto de Água e de Amigos" (1985), "Opus Visionário" (1986) and "Décimas de um Cantador" (1987). It has been suggested that the usage of experimental elements of music may have displeased most of the fans. In 1990, he performed in the United States for a Brazilian audience.

In 1991, his only sister, Goretti, died. Even though, he was able to record his eleventh album, "Brasil Nordeste", and returned to his success times with the recording of the song "Entre a Serpente e a Estrela" for the soapopera "Pedra Sobre Pedra". In 1992, his fifth son, José, was born, and he released the twelfth album "Frevoador". In 1995, he had his first daughter born: Linda.

In 1996, he recorded the album "O Grande Encontro" live with his cousin Elba Ramalho (who had already re-recorded a very successful version of his song "Chão de Giz") and the well known MPB names Alceu Valença and Geraldo Azevedo. In the same year, he released his thirteenth album "Cidades e Lendas". The success of "O Grande Encontro" was so great that he decided to record it again in 1997 at the studio, this time without Alceu Valença though. The record sold 300,000+ copies, going Gold and Platinum. To celebrate his 20 years of career, he released the CD "20 Anos – Antologia Acústica". The record label Sony Music also released a box set containing three discs: one of rarities, one of duets and one of classics. Also to celebrate the 20 years, Brazilian author Luciane Alves released a book titled "Zé Ramalho – um Visionário do século XX" ("Zé Ramalho – a Visioneer of the 20th Century").

Before the end of the millennium, another great hit: Admirável Gado Novo (first released in his second album in 1980) was the opening theme of the soap opera O Rei do Gado. He also released his fourteenth studio album, "Eu Sou Todos Nós", and the sixteenth one, Nação Nordestina, in which he once again explored the music of his home land, the Nordeste. The album would later be a candidate for the Latin Grammy Award for Best Regional Music Album or of Brazilian Origins.

His first work of the 21st Century was the release of "Zé Ramalho canta Raul Seixas", a cover album with songs by Raul Seixas. He then shared stage with Elba Ramalho in the Rock in Rio 3. In 2002, Som Livre releases a CD of his greatest hits, part of its "Perfil" series of Greatest Hits albums. Also in 2002, he released his seventeenth album, O Gosto da Criação.

In 2003, he released his eighteenth album, Estação Brasil, containing 19 recordings of his main Brazilian influences, and one new song. He guest appeared in the song Sinônimos ("Synonyms"), from Chitãozinho & Xororó's album, Aqui o Sistema é Bruto ("Here, the system is Brutal").

In 2005, he recorded his only live album, simply titled Zé Ramalho ao vivo. His latter album, Parceria dos Viajantes, was recorded in 2007 and was nominated for the Latin Grammy Award for Best Brazilian Popular Music Album.