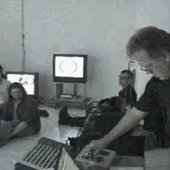 Profile:
Artist and musician based in New York. From last.fm: "[Tom Moody] has been uploading tracks made with home computer and various gear to his blog at www.tommoody.us since 2004. Has posted over 800 songs. His earliest music was made with the Macintosh SE but he works primarily on a PC now. Has collaborated with Earcon (on the CD Scratch Ambulance), Travis Hallenbeck, and others. Was interviewed in the documentary 8-Bit but his music is on the periphery of that scene due to extra bits."
Sites:
tommoody.us, Bandcamp, Wikipedia, 122909a.com.rhizome.org, leparergon.org, Last.fm