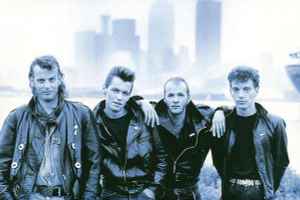 Rumble On The Beach

Profile:
Rumble On The Beach were founded in mid-1985 by Andy, Ohlly and Marc. Their first big independent hit was a Rockabilly version of Prince’s Pop classic, Purple Rain! Their debut-album ‘Rumble Rat’ reached #6 on the Indie Charts in 1987. Even the popular German teenage magazine ‚Bravo‘ wrote articles about them. Record releases and tours throughout Europe and Canada/USA followed, including a tour with the legendary Stray Cats. Since 2015 they are "Back On The Road" - in 2016 they re-released their first records on Bear Family Records.
Sites:
rumbleonthebeach.com, Wikipedia, MySpace
Members:
Andy Merck, Marc Mittelacher, Michael Ohlhoff