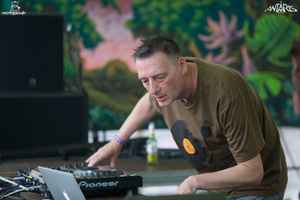 Real Name:
Martin Freeland
Profile:
Initially starting out as a British techno producer in the late 1980s, Martin Freeland became hugely influenced by the early nineties Goa trance scene. He scored a top 75 hit with 'Floor-Essence' before releasing the influential 'Moment Of Truth' album in 1996, as well as remixing work for many artists, such as Virus, Perfecto Allstarz, BT and Dreadzone.

A second album was released in 1998 on Paul Oakenfold's Perfecto album, which was aimed towards the more commercial sound of euphoric trance of the era. A third album 'Interstate Highway' was released by Dragonfly Records in 2003, showcasing Freeland's more progressive psytrance sound.
Sites:
manwithnoname.co.uk, Facebook, MySpace
Aliases:
Martin Freeland, Pozitiv Noize, Yogi & Grey One
Variations:
Viewing All | Man With No Name
M.W.N.N, M.W.N.N., MWNN, MWWNN, Manwithnoname, Mna With No Name, Mwnn, The Man With No Name, m.w.n.n.

September 9, 2015
A complete and utter legend. Simple as that.

September 2, 2015
I am a MWNN disciple and a completist. He is one of the very best producers of electronic dance music and shares the podium with Etnica/Pleiadians as the best in Goa. He is perfection. A true master. And I'm not even yet talking about his incredible gift for remixing, one of very few Goa artists who did remix consistently.
I

M.W.N.N. was one of the defining artists in the goa scene since its beginning. He started producing techno in 1990 but as trance came along he switched to this style. From his very first (trance) production he soon became popular for his melodic style of trance, with his immediately recognisable sound suiting both the hardcore psi heads and both the more laid back general trance listener. Tracks like Teleport, Sly-ed, Evolution & Lunar Cycle are prime examples of his unique sound, and his first full length album “Moment of Truth” in 1996 is still one of the most sought after trance albums. His second album “Earth Moving The Sun” is perhaps not as good as the previous, but i.m.o. is still that kind of sound you wish all melodic trance was like that.

He also did tons of remix work; perhaps the most famous being the remix of Moonraker originally from Disco Volante.

Unfortunately in the late 90’s he seemed to have gone a bit behind the scene. More recent productions like the 2000 remix of the single Teleport has been criticised for being a bit cheesy and sounding commercial. However M.W.N.N will always remain a legend for those old enough to remember him since the early days of goa.