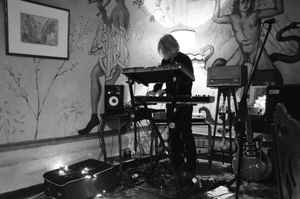 Real Name:
Peter Moorkens
Profile:
Peter (28/11/1965) was born in Antwerp and got an acoustic guitar and an Roland JX-3P from his mother. This started is interest in music (besides collecting records).

He started to play music with a friend which led to the band "Smeurebreud". He sang in this folk-pop band together with Egon, Oswald en Marc in the early eighties. They did a few memorable gigs and had a local hit with the song "My Doggy's gone".

In the nineties Peter relocated in Ghent where he met Jeroen Saegeman (The Walpurgis Family, Groom). They soon started a band called "The Moonfolks" (1996-2001). First it was only the two of them but soon many came and went. It was a free form jamband. Everyone present at rehearsals was persuaded to take up an instrument and play along. In the end the band had 4 members: Peter (guitar, tenorsax, Synths, mouthharp and vocals, Jeroen (guitar, synths, drummachine, vocals), Dennis (bass, iron plates) and Michael (drums). They played mostly in Ghent.

With the new millennium arriving they played their last gigs in "De Kelder" and went separate ways. Jeroen formed Happy King2 and Peter bought a Tascam 4 track cassetterecorder and a Loopstation. Electric Loopstation was born. (Meanwhile Moonfolks are alive again since 2018-...)

Electric Loopstation is a one person band who's experimenting with all kind of musical genres. The music is often described as film music because it calls up strong images. Electric Loopstation is basically influenced by Pink Floyd and Klaus Schulze but with a wide range of other artists that slips into the music. Apart from the more ambient/trance pieces there are also simple pop songs . These can be interwoven in broader contexts or be plain (space) rock songs. Mostly he plays all instruments himself but now and then he gets a helping hand from friends from his earlier bands. This is more a studio project.

In search for a moveable setup of instruments especially for live gigs (he got no car so it has to fit in a large suitcase) the music changed along. This live project was called Onsturicheit. It is dutch from the dark ages and it means turbulence, noise, wildness, unbridled, etc. It's mostly electronic and is unpredictable and so never the same. The keyword is soundscapes and samples, sequencers and textures.

Apart from this Peter also sang in a blues/rock/psychedelic band "Daisy and the Diving Duck" and did a project with Frans called "Greetings from Watervliet". With Lawrence Van Haecke (Wijlen Wij en Solicide) he did two unfinished projects called Schlachthof Berlin and IAWEH. It's a combination of funeral doom and electropsychout.
Sites:
Bandcamp, archive.org, SoundCloud
Aliases:
Electric Loopstation, Onsturicheit