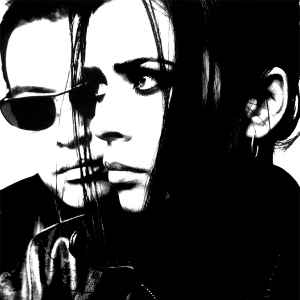 Seminal indie rock/electronic crossover group who originally met through David Stewart of Eurythmics, whom Toni has known since she was a teenager. Dean played on two Eurythmics albums, Touch and Be Yourself Tonight. The two played together in the unsuccessful 80s band, State Of Play (2), and parted on acrimonious terms. However, they resolved their differences and formed Curve in 1991.
Their first releases were very successful in the UK indie scene, but, despite critical acclaim, they never grew beyond that level. Low sales of their second album, "Cuckoo", led to the group splitting for four years, with Toni and Dean working with others. They reformed in '96 and released "Come Clean" the following year, the singles from which made a bigger splash in the US than their earlier material. However, the momentum didn't continue and label difficulties caused them serious problems.
Further releases failed to attract much interest outside of their core fanbase and, following the release of a two-disc retrospective in 2004, Toni called it a day on 31 January 2005, saying that the group had "come to its natural end with a lot of good work achieved in the last 15 years."
Sites:
curve.co.uk, curve-online.co.uk, Bandcamp, Facebook, Wikipedia
Members:
Alex Mitchell, Dean Garcia, Debbie Smith, Rob Holliday, Steve Monti, Steve Spring, Toni Halliday

Wow. This is one of the most unfortunate bands from the 90's indeed. Maybe Garbage stole the spotlight light from them, but it won't deny Curve's awesomeness. This band was (and still is) a definition of an alternative rock. Their music combines shoegaze, grunge, techno, breakbeat with even a slight touch of industrial and post-punk. Their texts are full of magical realism which reflects on everyday relationships in a highly allegorical/esoteric sort of way. All of this stuff is reinforced by incredibly insightful vocals of Toni Halliday and very skillful rhytm-section filled with all-consuming energy coming from these multilayered music styles in one place. Check out their bandcamp page - a lot of goodies stored up there, including fan bootlegs. If Garbage is good, than Curve is elite.

April 5, 2020
I could not agree more with how great Curve was, is, and will be for those who discover them. I don't think they were properly marketed and doomed to college radio. I discovered them in the early 1990s. Although they were lumped in with UK Shoegazer bands, they had more in common with Wax Trax! and the industrial scene or even Jesus Jones.
That said, Coast Is Clear was seriously overplayed on the local college radio/alternative rock station where I lived then. While Curve was mildly popular there, the frequency of radio airplay on a short playlist has a profoundly negative impact. Later the same station would play Garbage's latest single, Alanis Morissette, Republica, and Elastica ad nauseam as the broadcaster became more "managed" last word was they've gone to an all Latin format).
Another factor preventing Curve from achieving success in the US was the consolidation of most radio under the management of a few broadcasting corporations.
Those in the know can only thank goodness for the reissues when they come.

Curve have got to be one of the UK's most unfortunate bands. Emerging out of the shoegazer scene with a new crossover sound that only a small section of the UK scene was ready for, the commercial failure of "Cuckoo" led them to split at the worst possible time. In 1993, the UK mainstream wasn't quite ready for dark electronic rock, even with a Nine Inch Nails remix, the US scene wasn't ready for foreign bands doing what had only just broken through there. By 1995, the time was perfect, but Curve weren't there, allowing Butch Vig to create a band, Garbage, to fill the gap and attain the success Toni and Dean had craved. Their return in 1998 was simply too late, they had minor success with the singles off "Come Clean", but not enough to keep the label happy and it was downhill from there.

August 3, 2003
I am completely in love with Toni Halliday and her voice. I cannot understand why Curve never became huge. Bands like Garbage totally ripped them off and took it to the bank. Nonetheless, Curve made great electronic and rock music. They always had some great remixers as well. I believe they had Aphex Twin remixing them way before anyone else. I am nominating Horrorhead as the national anthem.
See 1 reply