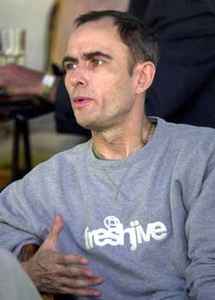 September 15, 2022
im originally from Bletchley in Milton Keynes and Eddie R/E-Mix/Jolly Roger used to have a regular slot at a club/venue/Outer Limits in the town of Bletchley, little did i know at the time Eddie (massive in da house) lived a street away from me an my fellow flyers! Played an old Outer limits set (July 1990) to my mate a week ago, he asked me where he could buy the CD, i had to chuckle, i said if you listen closely you will hear me and my mates in the back ground, cheering, back in 1990!!!
Point is that its relevant and contemporary now, as it was back then, a serious testament to ER!

August 29, 2022
Eddie Richards musical knowledge and production is steeped in the underground - where he has operated from without fanfare or desire for it. Because of this as a DJ and producer, the mindset shines through, the music having an unpretentious, classy and considered appeal. Much like his DJ sets, the selection is based on his own taste and sensibility, not pandering to names or labels.

Since his day's of being intrinsic to the alternative club culture of the 80's, he has been a quiet yet indomitable force that helped shape the scene in the U.K in way's most people don't realize - just google it!. Instead, he has worked behind the scenes, including musically pushing and producing a mix of classy, underground, rhythmic, tough and cleverly understated House and Techno. It's music for those that appreciate the dance-floor and yet a discerning, well crafted aesthetic – always with elegantly shifting percussive grooves, bass and an ear for all the elements to breathe and catch that peripheral driving sound that is a signature style. For those of us that would love more production, let's just be glad of the great catalogue available, hopefully with a few more to come.

Eddie is thoroughly deserving of a comment here. Tech house pioneer!! His stuff from the early and mid 00s has aged wonderfully and all worth checking out. He has an enviable ability to program rolling grooves that I could listen to on a loop for hours. Whenever I see an Eddie Richards remix on a 12 it's the first thing I'll listen to.