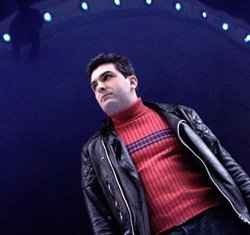 Real Name:
Pablo Gargano
Profile:
In the early nineties Italian born and bred DJ Pablo Gargano accepted an invitation from his friend to join him in Belfast, Northern Ireland. There, he started work for the 'Underground' record shop in Queen Street and became their resident DJ at their series of events known as 'Hellraiser'. Taking place at the Ulster hall, they regularly got crowds of 1300 people and within a few months his success rate was soaring with regular exposures in national press and undergrounds radio show passion fm. He found he was getting the frequent opportunity to hadline alongside the highest echelon of world D.J.s he soon obtained a strong reputation within the techno acid and trance genre with his individual style.

After moving to London and virtually having to start from scratch it only took 6 months to get back in the business, releasing singles for Rabbit City Records & Metropolitan Music getting DJing sets in clubs such as: Eurobeat2000, Innersenses, Club 414, and Heaven in London. After the return of his old partner Steven from Italy, they decided to open Eve Records in 1995 thanks to a P&D Deal with Flying distribution.

November 5, 2021
Pablo's flair for a beautiful, creative melody was very much in line with Vincent de Moor.

Very few producers in the mid-late 90's had such a uniqueness, but those guys had it and today their productions stand that little bit higher in estimation compared to their contemporaries.

It's telling that both Pablo & Vincent are no longer active. Like many creative people, they would rather stop than become stale.
See 1 reply

What do you even say? One of the true legends of '90s acid trance, and someone who genuinely charted his own musical path in ways few producers do. I won't even bother listing all my favorite tunes from Pablo, because we'd be here all day. Indeed, I normally carry on when I review artists, labels, and tracks, but this time, the message is simple: if you don't know Gargano's music, then start listening now.

To be fair, and as others have noted, Pablo changed his style and went more progressive after the turn of the millennium (like many other hard/acid trance artists from back then, in fact), but as Handsonrecords rightly suggested, even his tunes in that idiom were quality tracks with good production and atmosphere. On the other hand, I think his tunes before late '94/early '95 are a bit rough/raw, so for me, his real sweet spot was between '95 and maybe mid/late '99. During those years, the man basically never put a single production foot wrong. Legend.

Pablo Gargano is one of those names that instantly springs to mind when i think of the 90's, as "Handsonrecords.co.uk pointed out below his tunes neverr followed a formula, this is especially evident in the arrangement of his tracks, yeagh sure his tunes featured big build ups and breakdowns but never sounded cliched or contrived. Tracks like Trance in Saigon, 99.9, The unexplained, the stranger and i could reel off more were all high quality cutting edge tracks that straddled a line between hard trance& acid, thats not to say he didn't release a few stinkers - "everyones futur"e for example is a poor example of his work. So why did he stop producing, who knows, maybe he saw the shitty road the scene was heading down, ie commercialisation and decided to get out early

May 11, 2015
Pablo Gargano was such a massive influence on the underground trance, acid trance and hard trance scenes during the mid to late 90's. Also with numerous alias, his tunes never follow any formulas they just evolve and build into some quite outstanding journeys of music, and when you consider how much output he created during this period you've gotta admire the talent he has in the studio. Well worth checking out all his earlier material especially, but even some of the later more progressive stuff will really take you on a journey.

For me Pablo Gargano is a magician. One of my all time favorite producers. I´ll keep this short, because I could write a lot about this guy´s music. I´m just going to mention my two favorite tunes made by Pablo. Number one is The Stranger. Powerful, energetic and it almost makes me cry of joy. Lovely sample from the movie Dune. Number two is made under his alias Paul Gaarn, Meteor Attack. Another good powerful track, that makes me crazy every time I hear it. You simply have to hear his tunes to understand how good he is...