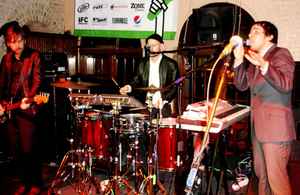 Profile:
Peter Bjorn and John are an Indie Rock trio from Sweden, formed in Stockholm in 1999 and named with the first names of the band's members: Peter Morén (vocals, guitar and harmonica), Björn Yttling (bass guitar, keyboards and vocals) and John Eriksson.

In 2001 they released their first EP, Forbidden Chords (EP) and a pair of singles "Failing and Passing" and "I Don't Know What I Want Us to Do", soon after they signed with the tiny Beat That! label.

Initially any fan/press attention they got had to do more with Björn's past production CV, as well as the other members guest appearances on other more well known bands records.
This began to change when in 2002 the home recorded self-titled debut album was released and songs like "Matchmaker" and "People They Know" became favourites with the indie-rock crowd.

2004 saw the follow-up with the more complete, mature and darker "Falling Out". The track "It Beats Me Everytime" became a hit on Swedish radio and the album was released Stateside the following year.

Two years later was released the album that would definitely launch the band, (worldwide speaking). The new album "Writer's Block" (recorded in Björn's studio in Hornstull, Stockholm) is the first to showcase all three members as songwriters with each taking on lead vocalist duties, and sees the band go into a new musical direction. The first single from the album, "Young Folks", features the vocal talents of Victoria Bergsman from The Concretes and has been hammered even before it's official release.

The biggest highlight after "Writer's Block" was the 2011 album "Gimme Some", the hit "Second Chance" became even better known as the opening theme of the American television sitcom
2 Broke Girls which was succeeded by 2016 "Breakin' Point".