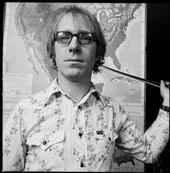 During the years he was most active with Sunburned, Marc formed a trio called Fall In Love with Kyp Malone (TV On The Radio) and Kevin Shea, who played loudly and sporadically around Brooklyn for several years. He worked extensively in the experimental beard rock trio Enos Slaughter, with Dave Shuford (No Neck Blues Band) and Carter Thornton (Izititiz). He performed and recorded solo as Ozone Layer (documented on a Manhand label CD called Formidable Circle) as well as under his own name (documented on a gorgeous 8" lathe of American primitive guitar on the Moran Tape Label). Marc was also in the final version of GHQ (with Marcia Bassett, Pete Nolan and sometimes Steve Gunn), and worked with Matthew Bower in the NY iteration of Sunroof!. He also had a duo with Mick Flower (Vibracathedral Orchestra) called OF. But he was most omnipresent with Sunburned, who played far and wide, stunning the punters with their reckless abandon. Near the centre of Sunburned's vortex was Marc's enormous riffing on his trusty Firebird (and later, lap steel or dobro). Rob reports he had abandoned playing the Moog after just a few gigs.
Sites:
MySpace
Aliases:
Ozone Layer (2)
In Groups:
3i(s), Eleven Twenty-Nine, Enos Slaughter, Juneau (2), Spore (2), Sunburned Hand Of The Man, Sunlayer, The Helix
Variations:
Viewing All | Marc Orleans
M. Orleans, MO, Marc, Orleans