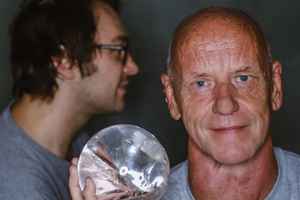 Profile:
Long-running UK electronic group, originally formed by Jimmy Cauty (of The KLF) and Alex Paterson in 1988, that grew out of a love of ambient music and dub, soundscapes and science fiction. Due to the early work in this style, The Orb became pioneers of the early-90's-born "ambient house" genre. The group's lineup has shifted over the years, with Alex being the only consistent member. Notable members include Thrash and Thomas Fehlmann. Though he was never officially a member, Youth (a.k.a. Martin Glover) was instrumental throughout the group's existence, and co-owned the label WAU! Mr. Modo Recordings with Alex (they had known each other since they were young, and Alex was a roadie for the group Killing Joke, in which Youth played bass).
Sites:
theorb.com, Bandcamp, Facebook, instagram.com, Twitter, vimeo.com, Wikipedia, orb-news.blogspot.com, fanart.tv
Members:
Aki Omori, Alex Paterson, Andy Falconer, Andy Hughes (2), Eric Walker (5), Fil Le Gonidec, Jimmy Cauty, John Roome, Keith York, Kris Weston, Lewis Keogh, Martin Glover, Michael Rendall, Nick Burton, Nina Walsh, Paul Ferguson (2), Roger Eno, Simon Phillips (2), Thomas Fehlmann, Tim Bran
Variations:
Viewing All | The Orb
ORB, Orb, Orb's, The Orb - LX And Fil, The Orb Mk II, The Orb's, The Rob, ジ・オーブ

The Orb have been a shining staple of electronica for decades. They've created sprawling soundscapes using great samples and programming. It's more a solo act with friends with Alex at the helm and you can hear the differences in their catalog. For the most part they've kept a solid hold on their creative endeavors. They've proven their musical worth and will always be a sound I seek out. Bring me the Orb!

My ever lasting musical reference point. What a gift The Orb has been to a world of curious music lovers for more than 30 years. Sure, among probably 1000s of tracks there's plenty of dated or uninspiring music, especially in the late 90's and early 00's, but at least a good 80-90% of their catalogue are placed in between Great, Awesome, Genius and Jaw Dropping. From their incomparable early Ambient House-sound, through their deeeeeply psychedelic Orbus Terrarum, from their Kraftwerk-esque Fehlmann-influenced Tech House, to plenty of catchy "hits" of different kinds. As a producer and DJ I am and will always be highly influenced by Dr. Patterson in how to fuse genres and moods, in how to combine depth and catchiness, and not the least in how a good and well timed vocal sample can create magic on the dancefloor.
For anyone new to the universe of The Orb I would first of all recommend their Auntie Aubrey remix-albums, because no band can even come close to the levels of Patterson in how to create something extraordinary out of simple audio. But the best album must be their "Live 93"-albums, especially if you already know their early cataloque. Those live-versions are simply beyond words. How I wish I was old enough to have been there, yet young enough to have a heroic dose at a rave.
Reply  See 1 reply Notify me 3 Helpful

February 19, 2021
One of their best, hard to find it, lost it the quantity of releases: https://www.discogs.com/Various-Badorbcom-Bless-You/release/172673

September 3, 2020
What is this: https://music.amazon.co.uk/albums/B08DCZ57CG "Disembodied Voices", Today, it's not on The Orb website. And can't find it anywhere else. Can anyone confirm?
Reply  See 1 reply Notify me Helpful

August 12, 2019
Don't bother with anything after '94, for better or worse Trash was the visionary of the Orb, compare their Live 93 to Toxygene, worlds apart. Hughes or Falconer really didn't get remotely close.
Reply  See 3 replies Notify me 6 Helpful

January 13, 2017
The Orb is perhaps the best-known name in mainstream Ambient music, and for all the right reasons. Since the end of the 1980s, Alex Paterson and a changing list of collaborators have produced chilled-out, ecstatic grooves and fluffy, flowing remixes for dancers greeting the dawn.
Their output is every bit as brilliant and stunning as the rising sun after a long night of physical flow and endless four/four pounding. Multicolored synth lines run like a watercolor palette in the rain. They layer blissful selections from Pink Floyd, Minnie Riperton, Ennio Morricone and Rickie Lee Jones to create a harmonious pastiche of original music, seamless samples and astute dialog.
...As the Orb's pulsating harmonies weave self-contained ecosystems of sound, delirious beats climb up the mix like vines, heavy with sweet fruit, ready for plucking.
Reply  See 1 reply Notify me 9 Helpful

January 31, 2016
Always been very keen on both The Orb and Pink Floyd so was very excited and not disappointed by The Orb and Dave Gilmour's 'Metallic Spheres' so why isn't it here?!
Reply  See 1 reply Notify me Helpful