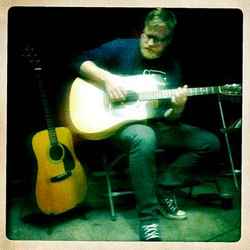 The debut fox release, the first rule of comedy by lonesome fox was released in December 2007 on bearos records. A host of fox singles and exclusive compilation tracks are available on where it's at is where you are records , and the debut solo album, everything is for the best by world of fox on commercially inviable records. A soundtrack to Marc Silver's film, there are no others, there is only us was premiered at the supersonic festival 2009. In 2010, world of fox released one free cover of an '80s song each month as part of the respect project and the whole thing was released on where it's at is where you are records at midnight on new year's eve 2011. Simon's third solo album, borrowed times, was released in 2013, again on commercially inviable records.
Sites:
worldoffox.com, wiaiwya.com, cominrecords.com
Aliases:
World Of Fox
In Groups:
Grover, James Summerfield, Krafla, Some Some Unicorn
Variations:
Viewing All | Simon Fox
Fox, S-H-Fox, Simon Fox (World Of Fox)