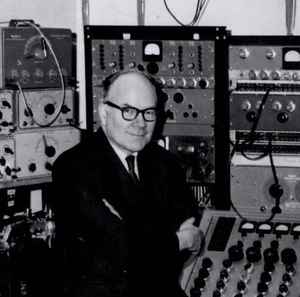 Real Name:
Otto Clarence Luening
Profile:
Otto Luening (15 Jun 1900, Milwaukee, WI — 2 Sept 1996, New York, NY) was a German-American composer, conductor, flutist, and prolific music educator, notable as one of the early pioneers of electronic and tape music. In 1958, he co-founded the Columbia-Princeton Electronic Music Center, the first academic electronic music studio in America. Luening was also one of the co-founders of the American Composers Alliance in 1937 and the Composers Recordings Inc. (CRI) label in 1954.

Luening was born in Milwaukee to German parents, and his family moved back to Europe when Otto was 12. He studied music at the Hochschule für Musik und Theater München in Germany and later at the Municipal Conservatory and the University of Zurich in Switzerland, taking lessons with Ferruccio Busoni and Philipp Jarnach. In 1920, Otto Luening returned to the United States, settling in Chicago for a few years. In 1925, Howard Hanson and Vladimir Rosing invited him to join the Eastman School Of Music in Rochester, New York, as an assistant opera director. Luening spent three years teaching at Eastman, where he also met his wife, a Canadian-born opera singer Ethel Luening. They were married from 1927 to 1959 and often performed together. Otto Luening taught at the University Of Arizona (1932–34), Bennington College in Vermont, and Barnard College in New York City. In 1944, he began teaching at Columbia University. As a director of Columbia's Opera Theater, Luening conducted several important premieres, including Virgil Thomson's The Mother of Us All, The Medium by Gian Carlo Menotti, and the composer's own Evangeline.

During his Columbia tenure, Otto began to seriously explore the realms of electronic music. He started collaborating with Russian composer Vladimir Ussachevsky, who joined Columbia faculty in 1947, as they both shared the interest in magnetic tape's potential. In October 1952, Luening and Ussachevsky presented a landmark performance at The Museum Of Modern Art, New York, often considered the first American electronic music concert. The program featured Otto Luening's Fantasy In Space, a composition for flute with tape accompaniment, which is one of the earliest examples of the "overdubbing" technique. Praised by critics nationwide, the MoMa concert almost instantly brought Luening and Ussachevsky into the spotlight as pioneers of a new, futuristic type of music. In December 1952, composers appeared on The Today Show hosted by Dave Garroway. The duo's partnership resulted in over twenty compositions for magnetic tape and synthesizers, or acoustic instruments combined with electronics. Some of the notable works include Rhapsodic Variations (1954) commissioned by The Louisville Orchestra, and Luening's In The Beginning from the 'Theater Piece No. 2' (1956) with microtonal sequences, composed on the Juilliard School's anniversary.

In 1958, with a grant from the Rockefeller Foundation, Ussachevsky and Luening opened the Columbia-Princeton Electronic Music Center with four fully-equipped tape studios and the iconic RCA Mark II Synthesizer. Over the years, C-PEMC expanded and acquired other cutting-edge technology, including Buchlas and Serge Modular synthesizers. Luening continued working at C-PEMC until 1970.