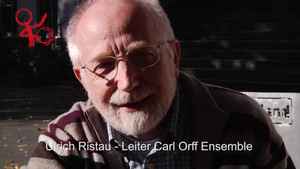 Profile:
Ulrich Ristau, born in 1948, studied the Oboe in Dortmund and Cologne and after that for 6 years headed a music school. During this time he took extra-occupational harmonica lessons from Helmuth Herold in the harmonica world capital Trossingen (Germany) and developed a concept for an elementary music education, based on the harmonica and Orff instruments. He has been teaching this method at the music school Hannover since 1980. From his work at the music school developed the Carl-Orff-Ensemble, which uses Orff Schulwerk instruments (chromatic glockenspiels, xylophones, metallophones, chime bars, from soprano to bass) and additionally chromatic harmonicas, recorders and other instruments, if ensemble members play any (e.g. violin, saxophone, drum set). From the beginning there was a close relationship to SONOR, because Ulrich Ristau received the crucial impulse for his work in 1982 during a workshop of IGMF (International Society for music pedagogical training), which had been founded by SONOR. Concert tours followed, the furthest led the ensemble to Korea, as well as CD and video recordings. It was a special honor when in 1995 Lieselotte Orff, the famous composers widow and a supporter of the Orff Schulwerk approach, allowed the group to carry the name "Carl-Orff-Ensemble", which was bound to Ulrich Ristau being the conductor.
Variations:
Viewing All | Ulrich Ristau
U. Ristau