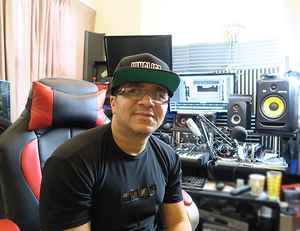 Bizzy B founded Brain Records in 1991 and started releasing Breakbeat Hardcore taking influence from House and Techno but adding heavy breakbeats and ragga vocal samples. He pumped out dozens of records, often under other monikers or in collaboration with other producers. Along with Dean Vincent (Pugwash), he formed The Dream Team, which released material on seminal Jungle/Hardcore label Suburban Base Records, as well as the duo's own Joker Records.

The Dream Team debuted in 1994 with "Stamina / Warriors" on Suburban Base, forming Joker Records soon after, and keeping up a prolific release schedule throughout the decade. They released the full-lengths "The Drum & Bass World Series" and "The Trilogy" in 1997.

Around the turn of the millennium, Bizzy B produced UK Garage tracks as part of projects like "The Beatfreaks (2)" and "Second Protocol". He also produced Drum n Bass as "Warped Science". Eventually a resurgence of interest in Jungle's harder side led to Bizzy B's earlier material gaining a new audience, and his newer productions brought back the Amen breaks.

He remained highly active during the 2010s, releasing new productions as well as collections of unreleased tunes from the '90s.

February 19, 2021
When you buy a Bizzy B track, you get the bang for your buck, so many manic ideas squashed into one track, join king of the amen with the man like remarc
Reply Notify me 1 Helpful

Bizzy B. Ruled along side some amazers producers. What a full packed year that was upon the pirate radio stations! 1993. At 44 I have tried so many times to shake off the jungle. But it is impossible! It's too ingrained into my psyche. So much still to learn with this music ..... "We have such sights to show youuuuuuu" Peace

Heavyweight hardcore/jungle producer, absolute mental old hardcore retro stuff from this man, tonnes of aliases and labels so much music other there. Over the years he's released a lot of unreleased tracks, lately his bandcamp is releasing unreleased 92-93-94+ stuff.

Seriously some of the craziest oldskool beats around. The man made some absolute intense bangers back in the day -- I recommend his work to any true junglist. Even today in 2011 his work can still light up the dance floor as kids who were not even conceived of at the time these tracks were being made groove to them as they 're hearing them for the first time ever.

i just wanted to add a bit more

From hardcore to ragga jungle to darkside the guy has mastered them all, there's very very few that can say that, so next time some idiot waffles on about jungle dnb legends and they start mentioning all the usual names, like goldie bukem dillnja, make sure you get them to mention this guy, and if they dont know get them to know

December 19, 2007
In my opinion, Bizzy B undoubtedly produced some of the best and ruffest hardcore tunes between 1992 & 1994. His clever use of samples led to his unmistakable style of manic sample chopping and pitch shifting and was a sure fire way of getting the ravers dancing in clubs all over the land. His tunes are only maybe rivalled by Dave Charlesworth for sheer unadulterated "out ya box" ruffness!
For anybody wanting raw no nonsense oldskool hardcore this is the producer for you.
Reply Notify me 7 Helpful