Pieces Of A Dream 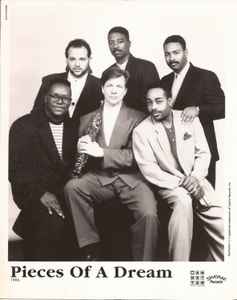 Profile:
Founded in 1975 by James K. Lloyd (keyboards), Cedric Napoleon (bass) and Curtis Harmon (drums), they performed all over Philadelphia as 'Classic Touch', 'A Touch of Class', and 'Galaxy'. The group changed their name to 'Pieces Of A Dream' in 1979, a nod to “Pieces of Dreams,” a Stanley Turrentine tune that the group performed. They were discovered by Grover Washington, Jr. whilst performing as the house band on TV show "City Lights". Grover went on to produce their first three albums Pieces of a Dream, We Are One and Imagine This. Soon after completing Joyride, their last effort for Elektra, they moved to EMI/Blue Note and went on to record seven more albums. During this period, the group amicably parted ways with long time friend Cedric Napoleon. Signed with Heads Up International in 2001 and have so far released four albums: Acquainted with the Night, Love's Silhouette, No Assembly Required and Pillow Talk.
Personnel currently consist of Lloyd, Harmon, Eddie Baccus Jr.(saxophone), Todd Parsnow (guitar) and Tracy Hamlin (vocals).
Were (and still are) managed by the drummer’s father and uncle, Danny and Bill Harmon, respectively.
Sites:
piecesofadream.net, Wikipedia
Members:
Cedric A. Napoleon, Curtis Harmon, James K. Lloyd, Norwood, Tracy Hamlin
Variations:
Viewing All | Pieces Of A Dream
Peices of a Dream, Pieces Of Dream