People Under The Stairs 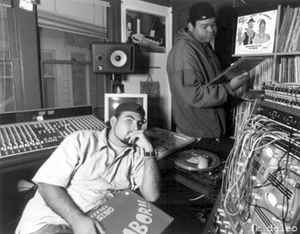 Profile:
People Under the Stairs were an American hip hop group from Los Angeles, California, formed in 1997 and disbanded in 2019. Since their inception, the group has consisted solely of Christopher Portugal (Thes One) and Michael Turner (Double K). The group employs a DIY work ethic of sampling, MCing, DJing, and producing all of their output. Despite difficulties achieving mainstream or chart successes, the group has shunned critiques that they are an "underground" group. They have achieved notoriety and praise from fellow musicians.
Sites:
puts.band, Bandcamp, bandsintown.com, Facebook, Twitter, YouTube, genius.com, Wikipedia
Members:
Chris Portugal, Mike Turner (6), Smile-Oak
Variations:
Viewing All | People Under The Stairs
P.U.T.S, P.U.T.S., P.u.t.s., PUTS, People Down The Stairs, People Under The Stairs Of Los Angeles, Puts, The People Under The Stairs

March 27, 2021
Legends. So much love for the music is shining through everything these dudes did. Rest in peace Double K. Thank you for the inspiration and all of the great shit you guys put out there!

February 3, 2021
Rest in Power Mike. I cant believe you're gone, but your memory, legacy, and music will live on. You were an amazing guy. Thank you for the good times and awesome tunes.

One of the greatest. It's really sad to see them go. If you get the chance, listen to their first album. Either you're hooked or you're not.

Yo!! With the last album being released, the time is now to show the world that People Under The Stairs matters!! Please share the hip hop legacy they've created by: buying their digital and physical albums (digital sales show companies and streaming services how popular/relevant certain artists are), leaving reviews on websites, sharing stories with friends and others, requesting their songs on the radio, playing their songs for friends and at parties, gifting some of their music to someone, making mixes and remixes, talking about them on podcasts/vlogs/blogs, or leaving a comment like I'm doing right now. Whatever you got to do, just please show the world how amazing this group is!! These guys are some of the most important hip hop/rap artists to ever exist! Period.

I've discovered these men one year ago, because they are in the Om records label (house, breaks label). All I can say is that People Under The Stairs are without a doubt the BEST underground hip-hop I've ever heard. They got all I want from Underground music. The lyrics are conscious, not the more intelligent and artistical language ever, but we are far from gangsta bling bling. Here, U have intelligent hip-hop. The Beats are catchy, mellow, and jazzy. You like underground hip-hop universe and atmosphere? U have understood how is the real soul of hip-hop? So check them. All the LPs are good, without any exception. The flow and the voice of the 2 MCs are incredible. The PUTS sound reminds me tha cool atmosphere of skateboarding universe, the sound smells like the street. No, don't think about gang affairs, guns, drugs and other here; I talk about the real spirit of street, in the time when MCs didn't have a ridiculous ego..