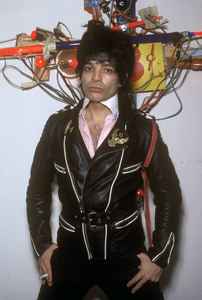 Vega began his career as a visual artist, gaining notoriety for his "light sculptures" eventually opened his own lower Manhattan gallery space, which he dubbed the Project of Living Artists. The Project served as a stomping grounds for the likes of the New York Dolls, Television and Blondie as well as the 15-piece jazz group Reverend B., which featured a musician named Martin Rev on electric piano. Soon, Vega and Rev formed Suicide, whose minimalist, aggressive music - a fusion of Rev's ominous, repetitive keyboards and Vega's rockabilly snarl - helped pave the direction for the electronic artists of the future.

Suicide disbanded in 1980, and both Vega and Rev undertook solo careers. Vega's self-titled 1980 debut and his 1981 effort Collision Drive continued to explore the fractured rockabilly identity he had established in his earlier work. 1983's Saturn Strip, produced by longtime fan Ric Ocasek, marked Vega's debut for Elektra Records; corporate relations soured during production for 1985's Just A Million Dreams, however, and at one point the label even attempted to remove the singer from his own studio sessions. Vega teamed up with Martin Rev and Ric Ocasek again in the late eighties to produce and release the third Suicide album, A Way of Life (1988). Shortly thereafter, Vega met future wife and music partner Elizabeth Lamere while piecing together sound experiments that would evolve into his fifth solo album, Deuce Avenue (1990). Deuce Avenue marked his return to minimalist electronic music, similar to his work with Suicide, in which he combined drum machines and effects with free-form prose.

Over the next several decades he would release several more solo records and perform and release albums with Suicide. In 2012, Vega suffered a stroke. That, and problems with his knees, led him to focus on less physically demanding art, such as painting, however, he continued to perform at selected concerts and work on the music that led to his final studio album 'IT', which was released posthumously on July 14 on Fader. The album was produced by Alan Vega, Liz Lamere, Perkin Barnes and Jared Artaud of New York City band The Vacant Lots.

November 20, 2016
Rest in peace, great Artist! He was uncompromising. Love Suicide! He had a unique voice too, like Elvis Presley mixed with Jim Morrison.
Reply  See 1 reply Notify me 5 Helpful