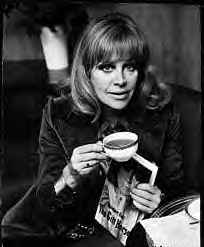 Hildegard Knef (known as Hildegarde Neff in the USA) has been possibly the last German diva in the classical sense besides Marlene with whom she was friends.

"Die Knef" (la Knef) started her carreer as a cartoonist at the Ufa studios in Potsdam in 1942. Already in 1946 she appeared in a leading role in Germany's first big movie after WWII called "Die Mörder sind unter uns" (The murderers are among us) - playing a former NAZI concentration camp prisoner. This unusual movie quickly developed into a massive worldwide hit. After winning several acting awards (e.g. Film Festival Locarno in 1948) and several movies later Knef decided to play "Marina" in the movie called "Die Sünderin" (The sinner) in which she performed the first nude scene in German filmmaking. The incident in the latter film sparked one of the largest scandals in German filmmaking history and drew the criticism of the Roman Catholic Church. In 1951 Hollywood called and she started playing with the likes of Gregory Peck, Ava Gardner and various others and made her Germany's number one export. Her 1962 appearance as "Pirate Jenny" in "Die Dreigroschenoper" (Three Penny Opera with Curd Jürgens and Gerd Fröbe) is another classical piece showing her incredible acting abilities. 12 years, several Hollywood movies and Broadway appearances later she decided to move back into Germany and focussed on her life not only as an international actress but also as a chansonette and author. In 1968 she won an award being the "Best female German singer" singing German classics such as "Für mich soll's rote Rosen regnen" which even became a top 40 hit again in 1992 when she was re-recording her classic with German Punk Rock-/New Wave-band "Extrabreit". Suffering from breast-cancer in the mid 70ties Knef decided to work more and more as an author and published several worldwide bestsellers including her biography called "Der geschenkte Gaul" (The Gift Horse).
"Die Knef" passed away in the beginning of 2002 after a long fight against cancer and has been tearing a massive gap into Germany's cultural scene which could have never been filled again with such an international flair and class.
Sites:
hildegardknef.de, YouTube, YouTube, YouTube, Wikipedia
Variations:
Viewing All | Hildegard Knef
H. Knef, H.Knef, Hilde Knef, Hildegard Keff, Hildegard Knef mit Chor, Hildegard Kneff, Hildegard Neff, Hildegarde Knef, Hildegarde Neff, Knef, Knef, H., Neff