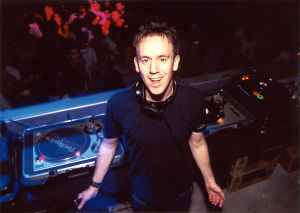 Profile:
Well-known UK production team which was responsible for hits like "Your Face," and "Scared," which became anthems of the mid-90's progressive house/trance scene.
Later Shem McCauley went solo and continued work under the 'Slacker' guise with multiple tracks being released on his Jukebox In The Sky label.

It's been 10 years since you took your own life ... but your musical influence lives on.
All the work you did, all the tunes you made/remixed and all the inspiration you gave hold so much weight in this world. Wherever you are, I hope you know that there are so many people who still admire you for what you created in the short time you were here. You are missed. Rest In Peace Shem.

July 15, 2021
Somebody needs to do a documentary about Shem. I'd love to learn more about him.

Ahhh,... I remember the news about his death in Thailand, but (if I remember it correctly) the reasons and circumstances have been something of a mystery when I read it (briefly after the death) back then - so from what I decipher here - he was driven into suicide suffering from depressions ????? *sigh* ... what a sad fuckup :( He was insanely fantastic,... just as Jukebox In The Sky was. He was holding the values of "atmosphere" and "mood" up high in a time and scene where that was not really the prevailing quality of most artists :) ... anyhow: I just came back from a bicycle tour in the sun, when suddenly I caught myself singing the "Looky Thing" vocals in a loop - and - immediately had a sooperbig grin for that one creeping back into my head (after so much water ran down the Nile in the meantime).
Let's not forget this guy, let's honor him and keep his legacy alive !!!!!

(and if you read this yourself on a cloud via some godOS mobile device, Shem - serious tele-back-pattings from my side - u will always find my studio-doors open for you if you are bored and need a place to haunt :)

February 16, 2017
Sasha and Digweed have alot to thank this guy for, he remixed countless tracks which featured heavily in their sets between 1998 - 2000, prodigy - smack my bitch up, breeder - tyrantanic, jark prongo - movin thru your system, locust - no one in the world are just a few which roll off the tongue. He certainly was creative and had the uncanny knack of taking a track, ripping it apart then placing his own unique spin on it, making it funky and progressive at the same time, R.I.P. Slacker

January 3, 2016
Shem was a man as creative as the shirts he wore. He was truly Streets Ahead. A great DJ and talented producer who sadly succumbed to the inner demons of depression.

December 28, 2013
A true visionary of electronic music in the late 90's. Productions that stand out with originality and quality. A true forgotten genius of the edm scene RIP Shem

January 4, 2013
If there was one thing I could say about Shem's music is that it truly stood out. Of all the producers/artist out there when Slacker released a track I didn't know what to expect but that's where his skill as an artist resided in. I meet him once at Club Ambersands, New Orleans, Louisiana where he played skillful set. We talked about 20 minutes and he was sincere and thanked me for his support. I even brought my 12 vinyl of Psychout to sign. Much respects for an artist who didn't follow the usual road in music.

February 2, 2012
RIP slacker! he was a master, and it showed through in his productions. TRUE electronic music and pure trance.

May 30, 2002
I don't think i've heard one Slacker tune/remix that was short of brilliant. "Fusion" and "Looky Thing" are just incredible. An album would be nice.....