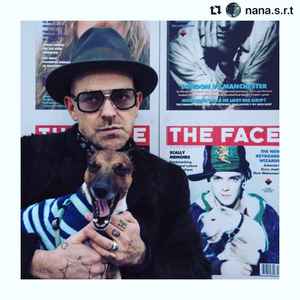 He took his artist name from the American UFO enthusiast George Adamski. In 1988 he moved into a bedsit above the Paradise Kebab shop in Camden, with Jimi Polo living in the adjoining bedsit. Jimi introduced him to house music, and taught him how to use a sequencer and a 909 drum machine. Adamski also played the piano line from Jimi's track 'Better Days'. Adamski began touring the UK with his set-up, starting off playing at Le Petit Prince in Kentish town, a club owned by his then manager Phil Smith. He ended up as the resident live show for Amnesia in Ibiza.
Sites:
adamskiofficial.com, Bandcamp, Facebook, SoundCloud, Twitter, vimeo.com, Wikipedia, YouTube
Aliases:
Adam Schmuck, Adam Sky, Adam Tinley, Adamski Products Inc., Adamski's Thing, The Vortex Of Chaos
Variations:
Viewing All | Adamski
ADM.SKI.XxX, Adamnski, Adams, Adamsiki, Adamsky, Adamsky Tinley

January 24, 2020
Sure both him and his brother released two tracks on Earcom 3
(Fast Product)
as STUPID BABIES
Reply Notify me Helpful

May 29, 2016
The first 3 albums listed here are timeless, get them if you're interested in some fun pumping music, or want to see the roots of house. Totally enjoyable, some great guest vocalists, and even some great basslines that still sound hectic. 25 years on!
Reply Notify me 2 Helpful

November 26, 2003
Adamski was the first house music producer that had all the real potential to become a pop star of some sorts. At least, it is arguably regarded as the creator of the first album in house music with some sort of full breath dynamic and artistic consistency. Its name: "LiveAndDirect". From it, a big hit: "N.R.G.".
But of course his crown of glory was one of the ultimate classics and biggest hits of house music, still to this day: his collaboration with a then unknown Seal, in the song "Killer". It was, without a doubt, one of the first true crossover hits for dance music and one of those tracks that still carries some charisma, despite its arguably dated production.
From then, there were some really hard times for Adamski. Now, it seems he is on a roll again, as the now Adam Sky is one of the residents of club du jour NagNagNag.
Reply Notify me 5 Helpful