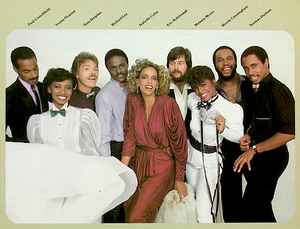 Profile:
Formed in 1972, the band has had a few name changes in its history. Originally they called themselves Pipeline (16) but they changed their name to "The Jam Band" by the mid-'70s. In 1977 they changed their name again as the British punk band The Jam became a sensation; their new name was The Universal Robot Band. In 1979 they signed to Atlantic Records using the name Kleeer. Becoming a cult band in the UK and US they enjoyed a string of hits in the R&B Charts. In the US national charts they had 3 top 40 entries, they had 2 in the top 50 in the UK, the only one both sides of the water being "Get Tough" although "Keep Your Body Workin'" is the track that they are remembered for. At their first beginning as a band, they played as a back-up group for The Choice Four, as both went from Baltimore to New York, which included Richard Lee on guitar, Norman Durham on bass, Gregory Talbot on keyboards and Woody Cunningham on drums.
Sites:
Wikipedia, soulwalking.co.uk, whosampled.com, allmusic.com, soulandfunkmusic.com
Members:
Eric Rohrbaugh, Isabelle Coles, Melanie Moore, Norman Durham, Paul Crutchfield, Richard Lee, Terry Dolphin, Woody Cunningham, Yvette Flowers
Variations:
Viewing All | Kleeer
Kleer