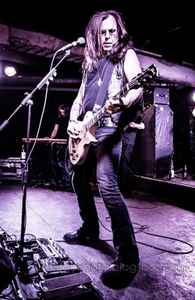 Profile:
Born November 28, 1961
American heavy metal guitarist from Tennessee. He first formed Death Row in the late '70s with his friend, bassist Lee Abney. After hooking up with drummer Joe Hasselvander, who was dating his sister at the time, Griffin relocated Death Row to Washington, DC where he and Hasselvander would bring bassist Martin Swaney and singer Bobby Liebling into the fold. Death Row would soon change their name to Pentagram. Victor would play with Pentagram on and off until 1996. He was one of the band's primary songwriters and recorded 3 albums with the group in that time. In the mid '90s, Victor (along with Joe Hasselvander) toured as members of Cathedral but he was fired following a confrontation with Cathedral vocalist Lee Dorrian. In the late '90s, Victor embraced Christianity, returned to Tennessee, and formed a new band, Place of Skulls, whose songs would reflect his religious beliefs. Near the end of the 2000s, he would resurrect Death Row with Hasselvander and Abney and in 2010 he rejoined Liebling in Pentagram.