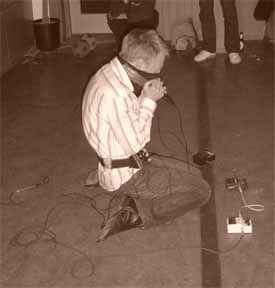 Real Name:
Lea Cummings
Profile:
Lea Cummings is a British musician and artist. Born in September 1974 in Lancaster and currently based in Glasgow, Cummings was the bassist for hardcore rock trio Phobophilia for some years before leaving to form Opaque (3) in 1997. Although the line-up of Opaque has changed on several occasions with Cummings the only constant, the unit built up an extensive discography of visceral, erratic, stimulating post-punk drone rock and performed live regularly, appearing alongside the likes of Boris (3), Sunn O))) and Matthew Bower's Hototogisu. This culminated with the release of the New Ways To Criticise CD in 2004 and a full European tour in July of that year. Their live performances could polarise opinion, with one particularly volatile show captured on the Live In Dundee 28.11.02 mini-CDR on Cummings' 8M imprint. Opaque was put on hold in 2004 with Cummings beginning a series of new projects, most notably his Kovorox Sound label which provided a platform for most of his new music and that of peers whom Cummings admired and respected, including Birds Of Delay, Noma and Nackt Insecten. He can presently be found as part of Temple Of Static Christ with Ruaraidh Sanachan and Alan Sinclair and in White Against This Sky with Alistair Crosbie but has become best known performing solo as Kylie Minoise, garnering a considerable reputation for his loud, confrontational Live Aktions which are often brief and invariably culminate in broken microphones and, occasionally, in personal injury. These performances have captured the raw, cathartic spontaneity of Cummings' aesthetic superbly and he has toured extensively with this project.
Aliases:
Kylie Minoise, Official Music Team, U-Drift74
In Groups:
Burning Swallows, Ideal Mexico, KMVSNI, Opaque (3), Temple Of Static Christ, Urine Gagarin, White Against This Sky