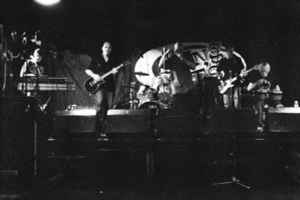 Profile:
The Gael Force has been together, in various incarnations, since 1998. The original line up comprised Kibo 160, STS and Que. After Que left, Bunty joined the collective.
2000 saw their first outing on vinyl, featuring on the Seven Seals EP by STS, which was released on Oh Eye Records. The Gael Force also featured on an Oh Eye Records compilation, Eye Drops Volume 1. This generated a Session In Scotland slot for BBC Radio, with The Gael Force contributing the original mix of Heads Up. The session also included performances from Reachout and the Yard Emcees (formerly Scotland Yard). The year culminated in a Christmas performance at the Oh Eye party in the Venue, Edinburgh. As well as Reachout and the Yard Emcees the party also included a spot from Farma G of London's Task Force.
In 2001 the group spent most of their energies putting out 4 track demos to radio stations and getting the tunes together for The Gael Force debut LP. After a gig at the Basement in Edinburgh with Reachout and his live band in 2002, The Gael Force decided to recruit a band of their own.
Hooking up with old friend and bass player Gary D, they were introduced to drummer Rich T. This in turn led to the involvement of the enigmatic Johnny 2 Strings on guitar. The pieces seemed to have clicked, until Gary decided to leave the band in Summer 2003. A stand-in, in the shape of Lefty, was found in August 2003.
Sites:
thegaelforce.com, MySpace
Members:
Kibo 160