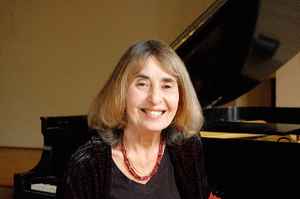 Nicole Milner co-produced her first release "Rites Of The Dolphin" in 1987 with Ishtar (4), a trio of piano, sarod and cello. In 1989, she founded MOSAIC, a group of women composers who perform their music in concert several times a year. Her solo piano recording "North Coast", released in 1989, was reissued as a CD in 1997. "Free Association", a CD which features Nicole performing her original compositions on solo piano, was released in 1997. She wrote the song "It's A Joy To Get To Know You" that was recorded and is currently performed by Shaina Noll. In 2001, she re-released the song "Peaceful World" on the compilation CD with the same name to benefit UNICEF. Nicole Milner died on Feb. 16, 2017, in Berkeley, California, a month before her 80th birthday.
Sites:
nicolemilnermusic.com