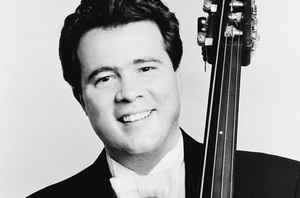 Meyer grew up in Oak Ridge, Tennessee. He learned to play the double bass from his father, the late Edgar Meyer, Sr., who directed the string orchestra program for the local public school system. Meyer later went on to Indiana University to study with Stuart Sankey.

Meyer is noted for achieving virtuosity on an instrument of unusual technical difficulty. Following in the footsteps of other bass players like Gary Karr and Mark Bernat before him, he has tried a hand at performing music originally composed for other instruments, such as Bach's unaccompanied cello suites.

Meyer has also composed a number of works, including two double bass concertos, a string quintet, a double concerto for bass and cello, and a violin concerto in 1999 composed specifically for Hilary Hahn.

In 2000, he won the Avery Fisher Prize, given once every few years to classical instrumentalists for outstanding achievement. In 2002, he was named a MacArthur Fellow. Meyer's collaboration with Yo-Yo Ma and Mark O'Connor on the widely acclaimed Sony Classical disc Appalachia Waltz reached the top of the United States pop charts for 16 weeks when it was released. Meyer collaborated again with Yo-Yo Ma and Mark O'Connor on Appalachian Journey, that earned a Grammy Award for Best Classical Crossover Album.

On Meyer's self-titled 2006 Sony Classical release, he performs accompanied only by himself on a wide variety of instruments besides his usual piano and double bass, including guitar, banjo, viola da gamba, mandolin and dobro.