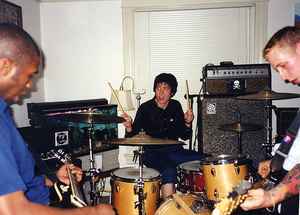 Profile:
Killsadie was a Minneapolis based post-hardcore band from 1997 to 2001. Known for their large number of line-up changes, and for being the spawning ground for a number of later indie rock bands, such as Minus The Bear, Pretty Girls Make Graves, Sharks Keep Moving, and These Arms Are Snakes.