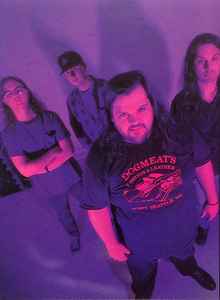 Profile:
Heavy sound from a heavy band. Tom Doyle formed the band in 1988 when he was living in Seattle. During the early 90's Seattle music scene their sound was more akin to the Melvins than to the more accessible grunge bands. They were one of the heaviest bands in town at that time. The band was harassed continually with lawsuits over album covers 8-Way Santa and the Jack Pepsi single. They had trouble with the Inhaler promotional material featuring President Clinton smoking a joint with the caption “This is some heavy shit!”. Eventually the bad luck wore on members of the band so they moved on to other projects. Tad later started a new band, Hog Molly.

September 15, 2021
2 comments only about a giant band. They are still great in Italy, only second to Nirvana and Mudhoney in the early nineties. Inhaler devastating album. I still love 8 way best

January 2, 2020
Why in the holy mother of hell did this band have to get screwed over by everything!!! I feel not only sorry for them, but I really wish I could give them all of a hug. Ya'll are not forgotten, Tad Doyle, you came out strong and I am proud!! (: