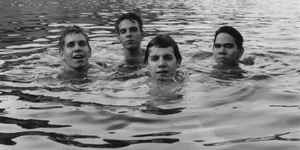 Profile:
Slint was an American rock band formed in Louisville, KY in 1986. They disbanded following the recording of their second full-length album, Spiderland, in 1991.

In 2005, 2007 and 2014 the band reunited to play a number of live shows. On the 2007 tour dates, in addition to performing songs from Spiderland and the untitled 10", they also debuted a new composition called "King's Approach." Their 2014 tour coincided with the release of a box set compiling a remastered version of the Spiderland LP, previously unreleased studio outtakes and demos, and a new documentary film about their origins and the Louisville music scene.
Sites:
instagram.com, descendo.com, MySpace, Wikipedia, Bandcamp, Facebook
Members:
Brian McMahan, Britt Walford, David Pajo, Ethan Buckler, Todd Brashear

April 6, 2021
Watch to documentary and listen to these abstract genius albums. Dave Sink was cool enough to get us teens into this band at a young age and did it ever change the way we looked at making music or hell even appreciated music from then on. I just did a few reviews of my favorite "Independent" Smartly Done Symphonic Punk Bands and I'm kind of tapped out. If you want something intelligent, smartly done, and a music that doesn't come right at you but hits you from the all sides other than what you are normally used too, then pick up any if all of Slint's releases.