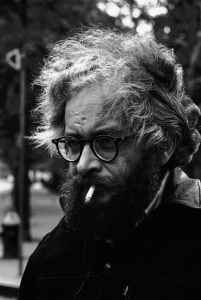 Real Name:
Harry Everett Smith
Profile:
American visual artist, experimental film maker and renowned archivist & researcher in the cultural heritage of American folk, country & blues music.
Born May 29, 1923, Portland, OR - died November 27, 1991, New York City, NY.
Having collected a vast hoard of early recordings since 1940, Smith then met up with Moses Asch, with a view to having his collection curated. Having licensed his archive to Asch's Folkways Records an anthology was produced, with Smith providing background & liner notes. Technically, many of these works were still the property of extant labels, so in some respects these early Folkways issues are unofficial.

Previously a West Coast film-maker, Smith was a rather eccentric character. His booklets and notes in the works are imbued with cosmology and alchemical influences. This aspect was doubtless a lure to Revenant, who reissued some of his Anthologies on CD in 2000.

In 1986 Folkways was acquired by Smithsonian Folkways Recordings, who reissued the set in 1997 in conjunction with the Harry Smith Archive. Smith died of cardiac arrest in the Chelsea Hotel, N.Y., in 1991. Poet, essayist & film-maker Paola Igliori, who had published a work on Smith in 1996 ("American Magus: A Modern Alchemist"), released a documentary of his life in 2001, entitled "American Magus".
Sites:
folkways.si.edu, Wikipedia, historylink.org
Aliases:
Mike Ferrario
Variations:
Viewing All | Harry Smith
Smith, Н. Смит

January 7, 2021
A wonderful collection of folk heritage. A must have of classics.