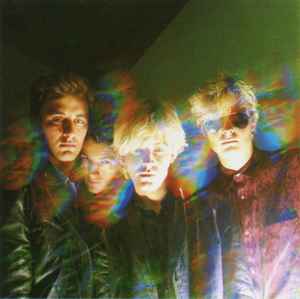 Profile:
Blue in Heaven came out of the ashes of a band called 'Amuse'. Amuse consisted of Shane O'Neill, Dave Clarke, Declan Jones and Dave Long and disbanded in 1981/82. Hailing from Churchtown, a suburb of Dublin, Ireland. They formed in 1982, and were signed to Island Records in 1983.
Their debut album All The Gods' Men was produced by the legendary Martin Hannett, and was released on 25 Aug 1985. Their second album "Explicit Material" was met with critical acclaim, and they played at the Self-Aid concert on 17 May 1986.
Following a tour with The Cramps in America, they were dropped by Island Records. They released the "Rock 'n' Roll R.I.P" EP in 1988 on Solid Records, and shortly after Kieran Kennedy joined the band.
Blue in Heaven disbanded in 1989 while recording for an album with a brass section. They later reformed as The Blue Angels.

September 7, 2019
Here is a great interview with David Clarke from Blue in Haven, you have to read it https://isolations.blogspot.com/2019/02/our-interview-with-dave-clarke-about.html