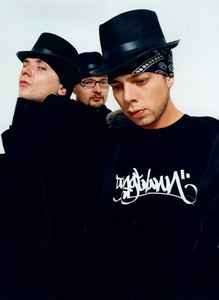 Jørg-1 and Poppa Lars joined together as Momentum in 1998. In the beginning the rapping was in English, but during 1999 the group changed their name to Tungtvann, and the rapping was now performed with North Norwegian dialect. Their first release "Reinspikka Hip Hop" was published just before Christmas 1999, and the debut album "Nord og Ned" was released in October 2000.
Sites:
tungtvann.org
Members:
Håvard Jenssen, Jørgen Nordeng, Lars Sandness
Variations:
Viewing All | Tungtvann
Tungt What?, Tungvann