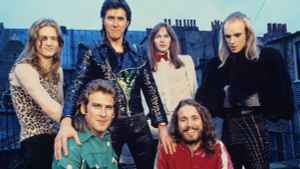 Profile:
Roxy Music were an English rock band formed in 1970 by Bryan Ferry, who became the band's lead vocalist and chief songwriter, and bassist Graham Simpson. Alongside Ferry, the other longtime members were Phil Manzanera (guitar), Andy Mackay (saxophone and oboe) and Paul Thompson (2) (drums and percussion), and other former members include Brian Eno (synthesizer and "treatments"), Eddie Jobson (synthesiser and violin), and John Gustafson (bass). Although the band took a break from group activities in 1976 and again in 1983, they reunited for a concert tour in 2001, and toured together intermittently between that time and their break-up in 2011. Ferry frequently enlisted members of Roxy Music as session musicians for his solo releases.

March 30, 2018
They left out Paul Carrack on the band mates section. He played on Manifesto
Reply  See 3 replies Notify me 1 Helpful

December 23, 2016
With albums that reek of cigarettes, absinthe, and sex, Roxy Music helped shape the artier side of 1970s and '80s Punk with their incredibly rich (yet deliciously subversive) early albums. Their first four records, released between 1972-1974, are filled with intensely passionate, undeniably beautiful, and downright groundbreaking moments. The voice, face, and stylistic force behind Roxy was Bryan Ferry, chief songwriter and dapper vampire-about-town. Megaproducer and ambient pioneer Brian Eno was an original member. He appeared on the first two records, adding bubbly, noisy, and sometimes decidedly non-musical synth effects. With strange usage of keyboards, sax lines that ranged from atonal skronking to soulful R&B, and supple guitar playing that rivaled Mick Ronson, the band was a musical powerhouse. Ferry's love of pop melodies and his ability to croon, bellow, and vamp with such disarming power brought all these elements together. Roxy always varied from sleek, sexy pop to jagged rockers to swelling ballads, and the former won out by the time of Siren (1975), culminating in the lush, gorgeous music of Avalon (1982). They ended their career revealing just how intoxicating romance can be ;)
Reply  See 1 reply Notify me 10 Helpful

December 7, 2015
For Your Pleasure is the second Roxy album, not Stranded...
Reply  See 1 reply Notify me 5 Helpful