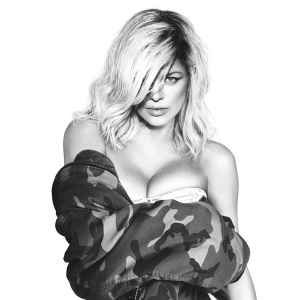 Real Name:
Fergie Duhamel (née Stacy Ann Ferguson)
Profile:
Born in 1975, Stacy Ann Ferguson did voice work for The Charlie Brown and Snoopy Show, as well as commercials, prior to becoming a Kids Incorporated regular from 1984 through 1989 alongside with Jennifer Love Hewitt. Along with Stefanie Ridel and fellow Kids Incorporated alum Renee Sandstrom, Ferguson formed Wild Orchid, a teen pop group that released a few albums during the late '90s.
In 2002, as she was doing backup, she met Will I Am who invited her to replace Black Eyed Peas background singer Kim Hill. She contributed to making Elephunk a succes and was thus asked to join the band permanently in 2003.
In 2006, she started a solo side-career.
Sites:
fergie.com, Facebook, instagram.com, MySpace, SoundCloud, fergie.tumblr.com, Twitter, Wikipedia, YouTube, YouTube
Aliases:
Fergie Duhamel, Stacy Ferguson
Variations:
All | Fergie (2)
Ferg, Fergie (Personal), Fugie, Stacy Ferguson, ファーギー

October 8, 2017
Fergie's ability to tackle a wide range of musical styles is what solidified her as a pop music icon. In my opinion, Fergie is what made BEP great. Fergie's debut album The Dutchess was the only album of the 2000's to have produced five top five hits. So basically Fergie is a Legend and her jams always go hard at parties even though they are over 10 years old.

There must of been a gas leak in here or something, because Stacy Ferguson now going onto a side project is just really all I can take. It was a horrible idea for Will.I.Am to invite Fergie to replace Kim Hall as a back-up in the BEP, because I feel (personally) that the BEP went downhill from the prescence of Fergie in the group. This side project of hers is just another plummit in this great world of music (according to me). Singing a song about London with some slutty/dirty, meaningless lyrics (relevance, I don't bloody know) just shows how limited and crap Hip-Hop has now turned out to be. What happened to the Old Skool Hip-Hop of the 80s and groups like Beastie Boys, we will never know, but for now, we have to stick to crap like this on the radio for another decade or so until something more crap comes along...