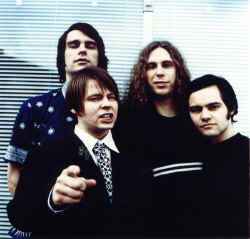 Profile:
Ray Wonder is a now defunct pop/rock band from Umeå, Sweden, formed at 4.15 p.m. on a Wednesday in December 1993. "Hurray", their first album, was recorded and mixed in two days. The second one took even longer, and the third one longer still. A track off that third album, "We Got To Be Good To Each Other", became a minor hit after appearing in a TV ad for Renault cars in 2000. After playing a few festivals in the Netherlands in July 2000 they threw in the towel and called it a day.
Sites:
web.archive.org
Members:
Henrik Andersson (10), Ludwig Böss, Per Helin, Toft Stade