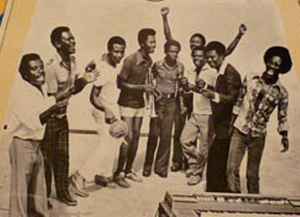 Profile:
Highlife band band formerly known as ‘El Dorados’, later to change their name to ‘Medican Lantcis’ before settling on ‘Sweet Talks’. Started under the joint leadership of Smart Nkansah and A.B. Crentsil as resident band at The Talk Of The Town Hotel in Tema near Accra. It is here they established a name for themselves as one of the most exciting young bands in the country.
Due to the popularity and commercial success of their first three albums – Adam & Eve, Kusum Beat and Spiritual Ghana – the band began touring on a regular basis and made it as far as Los Angeles (1978) where they recorded what was to be their biggest selling record; Party Time In Hollywood.