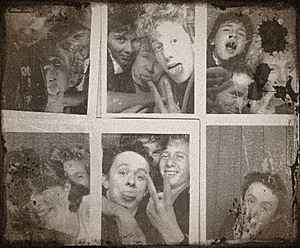 Profile:
Anabollic Steroids (deliberate misspelling) are a punk band who first appeared in 1978 as a hoax, with sessions taped from John Peel shows. Young punks James Bondage and Kappa pushed the fake demos around their school, convincing peers that they were a proper band. By 1981, with the introduction of Steve Steroid and 999 Si, they had recorded their own material and become a genuine gigging band with a following known as 'Stinkers'. They split early in 1983.
They reformed for a gig in 2012 at the 12 Bar in London which led to the band reforming.
Sites:
Facebook
Members:
Gerard Evans, Jason Glen, Kappa (6), Kevin Gregory, Michael De Victor, Si Barry, Steve Steroid
Variations:
Viewing All | Anabollic Steroids
Anabolic Steroids