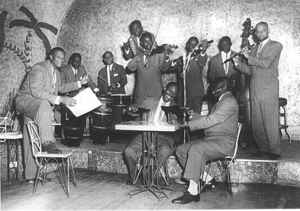 Profile:
Cuban orchestra, formed in 1940 in La Havana, disbanded in the mid 1970's.
Cuban orquestra of charanga style, founded at the end of the decade of 1930 founded by the musician Regino Frontela Fraga, who had previously been in the orchestras of Tomás Corman Vidal and of Valerio Moreira. The name is due to a movie of that time entitled "Broadway Melody of 40". One of the most popular song is “Me voy pa Morón”.