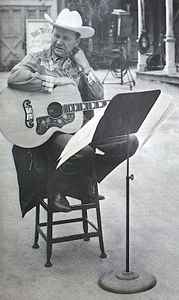 Real Name:
Woodward Maurice Ritter
Profile:
Born: January 12, 1905 in Marvaul, Tx - Died: January 2, 1974 in Nashville
American singer and actor; Woodward Maurice «Tex» Ritter played cowboy songs on the radio in New York in the first part of the 30s when a Hollywood producer discovered him. He appeared in a total of 85 films. Father of the comedian John Ritter (2).

Short bio:
In late 1932 Tex cut a few records at the ARC Recording Studios in New York but his career only started the next year with 78rpm releases on various labels such as Banner, Conqueror, Columbia, Oriole, Perfect or Romeo. Also known as by "The Singin' Cowboy" Tex then signed on with Decca (1935-39) before he switched to Capitol Records for a long and successful career.
Ritter died of a heart attack in Nashville, TN.

Career :
- Early 30s; New York, acted in the Broadway production Green Grow the Lilacs. Then began hosting radio programs like Tex Ritter's Campfire and Cowboy Tom's Roundup. Began recordings with producer Art Satherley.
- Mid 30s : Ritter caught the attention of Hollywood producer Edward Finney, was tapped to star in the Western Song of the Gringo (1936); stared in Trouble in Texas (co-starring a young Rita Hayworth, 1937) and a dozen of films.
- Late 30s-early40s : made some 20 Westerns, including "Take Me Back to Oklahoma" with co-star Bob Wills, worked with Columbia and Universal
- 1942-1972, he became the first country artist signed to Capitol Records, and stayed 30 years with the company.

Tex on the tops :
1944, Tex Ritter & His Texans topped the charts with the single "I'm Wastin' My Tears on You". The record's flip side, "There's a New Moon Over My Shoulder," peaked at #2. The follow-up "Jealous Heart." also made #2
1945 : "You Two-Timed Me One Time Too Often" peacked #1 for 11 consecutive weeks. Had another #1 with "You Will Have to Pay"
1948 "Rock and Rye,"
1950 "Daddy's Last Letter"
1953-1960 Ritter hosted the television program "Town Hall Party" while still having recordings for Capitol.
1961(after an 11-year charts absence), a C&W Top Five hit and Pop #20 with "I Dreamed of a Hillbilly Heaven"
1974 (posthumously) "The Americans (A Canadian's Opinion)" made the Top 100 hitting pos. #24
Sites:
Wikipedia, countrydiscoghraphy2.blogspot.fr, countrydiscoghraphy2.blogspot.com, billboard.com, imdb.com
In Groups:
Tex Ritter & His Texans, Tex Ritter And Trio
Variations:
Viewing All | Tex Ritter
Emcee Tex Ritter, Ritter, T. Ritter, Tex Ritter And Trio, Tex Ritter With Orchestra, テックス・リッター