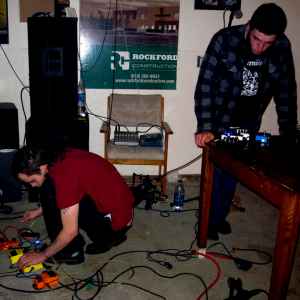 Profile:
The Redsk project started as a solo outlet from Patrick Harsh based out of Sumpter Township, Michigan. Originally spelled “RedSK”, the project was focused on experimenting in fusion of many genres and styles, but mostly based in shit noise, field recordings, power electronics, glitch, garage punk, grind, harsh noise and musique-concrete/plunderphonics. Redsk has switched directions, style and focus since 2006 and is very good at leaving behind a very confusing discography. As a solo entity, its main objective and purpose was to serve as an outlet for Patrick’s schizophrenic frustrations and anxieties/rage/non-stop manic thought processes. In 2014 the project was put on temporary hiatus and neglect to pursue spiritual enlightenment and an attempt to block out various life-distractions. As of October 2014, the Redsk project is revived as a band with a revolving line-up or many different line-ups depending on city/state. There is no purpose in being any more specific about the sound or direction of this project as it develops and changes several times every year since it’s inception. Currently Redsk is based out of Detroit, Michigan and is mostly released through TRASHFUCK Records, a DIY label founded by Patrick and ran with a staff of close friends and non-blood family.
Sites:
Last.fm
Members:
Aaron Midcalf, Caleb Voronwë, Cody Monceaux, Jon Gonzalez, Patric Pariano, Patrick Harsh, Will Olter
Variations:
Viewing All | RedSK
23d5k, Monster_SK, RadSK, Rdskskxsk, Rdskwalll, Rdxesksk, RedKS, RedSJ, RedSK_Monster, RedSKillet, RedSL, Redddsk, Redsk & Someotherstuff, Redsk Xsrkskxkrsk, Redsk_Monster, Redssk, Resdk, Rsk, Rsk/k, Rsk\\k, Rẍ,,sқᴇẉskSKsk, Rẍsқᴇẉ, Rẍ―sқᴇẉ, SK

July 14, 2013
for those that are trying to get trash fuck music, go to bandcamp. downloading is free, thank god
Reply Notify me 5 Helpful

I'm a personal friend of patrick's as well as a collaborator, sure some of the stuff is odd, misfortunate, and mostly lo-fi, but all in all i'd find it to at least be certainly interesting and definitely worth a listen, he pulls from ALL genres, not just noise, but literally about everything under the sun.
i've collaborated with him around 5 times now, 2 of which were studio, 3 of which have been live, me playing drums as "THCSK" an idea i had when i got way bent on the Insect Warfare noisecore album as well as the destruction/remix Merzbow did with Discordance Axis.
i've seen him as well as his gear progress in the right way, honestly i feel if he spent a month on making one solid piece of noise, or an album as opposed to hyper-production, it would probably be KILLER, but who cares, what fun is it if you're being far to serious, honestly.
the man's physical releases are astonishing and show time and effort, as i'm one to always be against internet only releases.

April 18, 2012
Just stop complaining dudes. He did advance from 2006. And it's a great advance. Newest stuff is nearly only on CD-R/tapes, but with some research you can find official rips on p2p. Also, TFRPROMOSK0 is a good place to start (Redsk0 CD-R in digital download). They're a great listen to a noise fan like me, while I also dislike some of pre-2009 internet stuff.
Reply Notify me 4 Helpful

I didn't check his all things because there's a kiloton of it. But some of albums I checked show his diversity: sometimes it's straight noise earbleed which I either like or dislike, and sometimes weird experimentalism which I really dig (check "Io, Scuzi!" to hear it). I disagree that it's all utter shit like some people I know say. The internet definitely helped to emerge certain new music types and genres such as desktopcore and RedSK certainly contributes to what I call "internet noise/avant-garde" (it's not all bad!), but I think he tries to do many things at once when he could just relax and focus on some bigger work.

A while ago, I gave a review of RedSK's work.
Well, I guess you could call it a review. What I actually did was rant aimlessly over the course of several paragraphs while simultaneously saying nothing beyond "this artist sucks."
What I'm trying to say is that I don't think my previous review of this musician was very well-executed, so I'm redoing it.
Anyway... RedSK has a rather unfortunate history of making rackets he was unable to own up to, from taking interesting concepts and completely phoning them in to placing emphasis on the wrong aspects (that is, interesting and shocking song titles, offensive artwork, and so on.) His discography is quite full of missteps, such as the high-on-improv, low-on-ideas "Run'a Da Mill," a stint as DJ RedSKeye whose most memorable work was just a bunch of stolen breakbeat tracks fed through an effects pedal, and "Please Kill Me," which, barring the bonus tracks, sounded pretty much like driving an automobile in dire need of repair with the turn signal on.
That being said, he's made up for his mistakes. While it took him a while, around 2010, he showed he could make genuinely engaging works, and a year later, he actually did so, with such pieces as "RedSK0" and his rather impressive contribution to the "I Heart Feedback" compilation, which featured such acts as Severed Fingers and Government Alpha.
In short, I can't recommend everything he did, and I certainly can't recommend anything he did until around 2011, I can quite safely say that he's at least worth paying some attention.