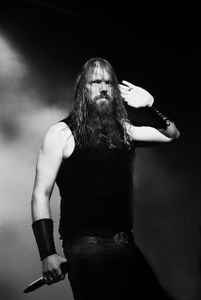 At live performances with Amon Amarth, he is often bare-breasted with leather bracelet and a drinking horn on the side of his belt. He is in charge of writing the lyrics for Amon Amarth, and writes mostly about the Vikings, Norse mythology and the like.
Sites:
Twitter, Facebook, Wikipedia
In Groups:
Amon Amarth
Variations:
Viewing All | Johan Hegg
Hegg, Hegy, J. Hegg, JH, Johan, Johan "The Bastard" Hegg, Johan Hans Hegg, Jphan Hans Hegg