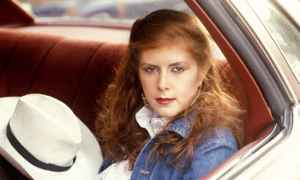 After a brief stint in 1978 with her first band The Drug Addix, she went solo and scored a big hit with the single "There's a Guy Works Down the Chip Shop Swears He's Elvis" in 1981. In 1984, she married producer Steve Lillywhite, and had two children Jamie Lillywhite (manager of Ellie Goulding) and Louis Lillywhite. She decided to concentrate less on her music and raise her children by solely performing back-up vocals on various projects. In 1987, one of her contributions was the Christmas hit with The Pogues "Fairytale of New York". She later came back in 1989 to record the "Kite" album.
In 1991, she put out her "Electric Landlady" album which provided her with the very big hit "Walking Down Madison". A few years later in 1993, "Titanic Days" was released.

December 11, 2020
Isn't a comprahensive "best of" on vinyl way overdue? I for one think so, and the same goes for the guy works down in the chip shop!

September 17, 2017
Just a note - in the biog above, Tropical Brainstorm was only released posthumously in the US. In the UK, it came out six months before her death. Especially as she toured it during 2000 (videos are on You Tube unless it's a ghost performing).
See 1 reply

March 24, 2013
Does anyone have kirsty's unreleased song 'A Boy Like That? Im a big fan of Gary Holton and he sang backing vocals on it.
See 1 reply