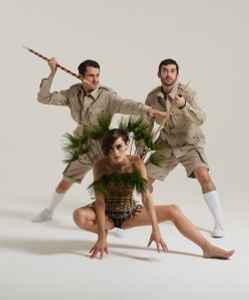 Profile:
French band founded in 2005 by lead singer and namesake Yelle (Julie Budet) and GrandMarnier (Jean-François Perrier). The name of the band is an acronym for "You Enjoy Life" (“Yel”), but was later feminised to "Yelle" because a Belgian band was already using the former.
They rose to fame on MySpace with a song called "Short Dick Cuizi" (later renamed as "Je Veux Te Voir") in which they diss Cuizinier (TTC) in a humorous way. This song caught the attention of the label Source Etc, which signed a record deal for their first album, Pop Up. At this point, French DJ Tepr joined the band and produced a very successful remix of their song À Cause Des Garçons, making it an instant hit and one of the main representations of the Tecktonik style.
After a long world tour and a few collaborations (highlighting the successful Parle À Ma Main with Fatal Bazooka), they released their second album (Safari Disco Club) in 2011, which didn't achieve the sales success of its predecessor but also had a huge world tour and made Yelle the opening band for Katy Perry's UK tour.
After that, Tepr left the group to focus on his solo career, but Dr. Luke (who had discovered them in 2009 with their remix of Katy's Hot N Cold) contacted them and they started working together on their third studio album, Complètement Fou, released on September 2014.
Sites:
yelle.fr, Bandcamp, Facebook, instagram.com, MySpace, SoundCloud, Twitter, vevo.com, Wikipedia, YouTube
Members:
Jean-François Perrier, Julie Budet, Tanguy Destable

Every time I get a Yelle album, I end up liking it, so I look to see if she's on tour. Every single time, she was performing in my city less than two days earlier. It just happened again. I missed the show by 3 hours.