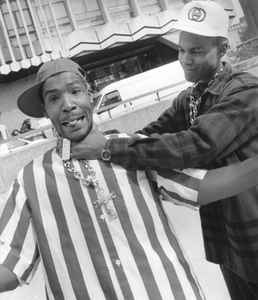 In 1987 Daddy Freddy teamed up with Asher D and, together with producer Simon Harris, created a blueprint for the first successful amalgamation of dancehall reggae (ragga - see below) and hip hop. Their debut album "Ragamuffin Hip Hop" sold reasonably well in the UK on Music of Life, in the USA on Profile Records and throughout Europe on various labels. The new sound inspired a new interest in combining reggae with contemporary dancefloor styles and a sound that continues today was born. Freddy continued this frontier-busting style by making "Ragga House" with Simon Harris and again a new style was born, house music and ragga. This single narrowly missed the UK pop Top 40 charts.

January 16, 2009
Daddy Freddy is a kind of vocalist that is bound to be celebrated but also cursed with obscurity. He had a lot of hits in Kingston, but when ported to the UK, his style was made more "user friendly" and production was dumbed down. He continued to put out decent songs, here and there on his Simon Harris produced albums, but the highlights of his career have been his first LP with Asher D, and some of his obscure Kingston records as well has his return hookup with The Rootsman which showed progression in Daddy Freddy's style. Daddy Freddy is one of the kind of artists that you can be skeptical about approaching his albums, some are my favorite vocal albums, some just pale in comparison. However, "Hardcore" is another highlight in his catalog. It's not as ground-breaking as his early stuff, nor does it have the quality of "Old School, New School", but it's a solid album none-the-less.