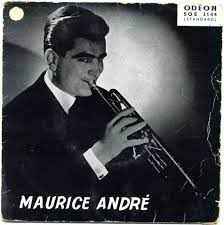 Real Name:
Maurice André
Profile:
World-renowned and influential French classical trumpeter. Best known for his recordings of Baroque works done in the 1960s and 1970s, he has released over 300 recordings to date.
(born: May 21th, 1933 in Alès, France - died: February 25th, 2012 in Bayonne, France)

Maurice André was born in Alés, close to the mining area of the Cevennes in 1933. He became a miner at the age of fourteen and began studying the trumpet and made very rapid progress.While still in the first year at the Conservatoire National de Musique in Paris he was awarded the Honorary First Prize for the Horn. In the following year he obtained the First Prize for the Trumpet. Maurice André later received the First Prize in the Munich International Competitions, entering upon a amusical career which took him to Germany where he was very warmly received. He travelled to England and Scandinavia and afterwards to North and South America. He has since travelled throughout the world. His early orchestral posts were with the Orchestre Des Concerts Lamoureux (1953-1960), the Orchestre Radio - Symphonique De Paris/Orchestre Philharmonique De Radio France (1953-1960/1960-1962), and the Orchestre Du Théâtre National De L'Opéra-Comique (1962-1967).

He was appointed professor at the Conservatoire National Supérieur in Paris in 1967. The long series of works that Maurice André has recorded for Erato are by 17th & 18th century composers. Modern composers also wrote works with him in mind, having been struck by the remarkable mastery of his instrument and his impeccable style and ability. He has received many Prix du Disque in France. In Germany, the Berlin Schallplattenpreis was awarded to him, a tribute to the esteem with which he is held in that country.

Harry Halbreich has written: "Maurice André incarnates the trumpet! There is an indissoluble link between the rugged golden red appearance of this happy, thickset southerner who sprang from within a mine to a glorious future at lightning speed. At the age of 36 he receives invitations to play from every corner of the globe. The ease with which he plays and his legendary virtuosity are perfectly matched with his wide musical knowledge. His trumpet sings as delicately as a violin note. He has acquired a repertoire which had the great composers of the past had the honour of meeting him, would have been more extensive than it is. His ability is astonishing since he is quite capable of matching up to the acrobatc demands of the Hummel Concerto. He is just as much at ease when playing the classical repertoire as he is when confrontened with a modern work."