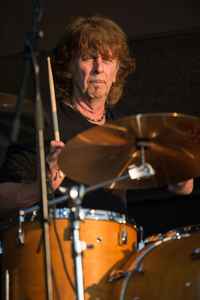 In the early 70's Lingwood joined Steamhammer, staying with them for two and a half years. For the next couple of years John tried several unsuccessful attempts at forming bands and also started working more as a studio musician. 1974, he joined Stomu Yamash'ta's East Wind and later that year went on to join Leo Sayer. On leaving Leo in 1975, he concentrated on studio work and had spells in the orchestra of 'Hair', 'Jesus Christ Superstar' and 'The Rocky Horror Show'. In early 1979 he joined the Manfred Mann's Earth Band and played with them until 1986. For this band he also co-produced their live album 'Budapest' in 1983. During the same time frame and after he played on records and/or live with Roger Waters, Chris Thompson, Roger Chapman and more recently with The Company of Snakes. Other bands he played with in his career include Amon Din, Brian Auger´s Oblivion Express, Elkie Brooks Band, Catherine Howe, Chris Farlow, Dave Greenslade, Maddy Prior, Arthur Brown, Brook Benton and Sparring Partners.
Lingwood co-wrote the theme for a TV series and appeared on a TV rock opera "Curricle, Curricula".
Sites:
Wikipedia
In Groups:
Manfred Mann's Earth Band, Steamhammer, Stomu Yamash'ta's East Wind, The Company Of Snakes
Variations:
Viewing All | John Lingwood
J. Lingwood, J.Lingwood, John (How, How, How) Lingwood, John (how, how, how) Lingwood, John Linwood, John Lyngwood, Lingwood