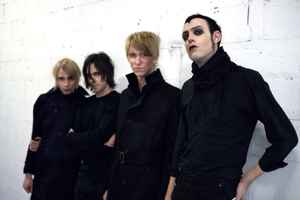 Profile:
Strip Music was originally a side project from around 2001 when Yvonne disbanded. Henric de la Cour was the founder and frontman, Christian Berg originally played bass but switched to synths.
They found Fredrik Balck (drums) in a club called Nightlife in Stockholm. He introduced them to bassist Valdemar Asp, with whom he used to play in a band called Vendor. Patsy Bay (guitar), was Yvonne's old guitar tech, while Jens Hellqvist (synths) knew Christian from when they were both in the band April Tears.
The band recorded demos. In September 2003 Yvonne's manager, by now also an executive at Swedish label Playground Music, agreed to promote Strip Music. Since their first gig that month, Strip Music have played over 50 dates around Sweden while their single 'Desperation' gained airplay.